Today is Giving Tuesday. Donate now to TRIPLE your gift! 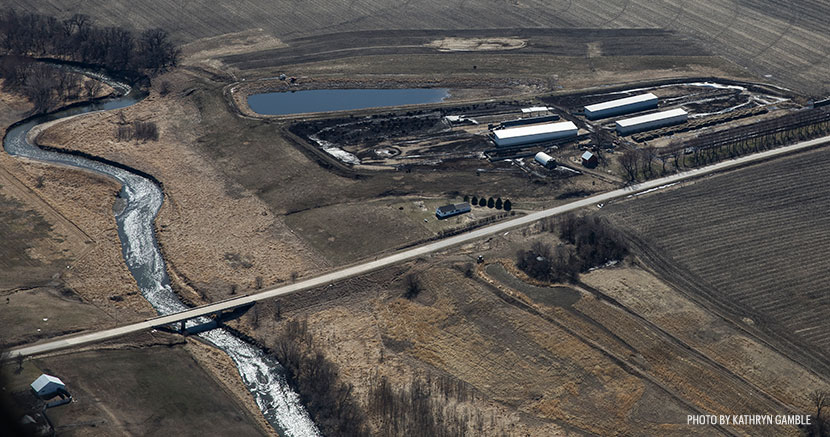 Iowa’s water is in crisis. There are more than 750 hazardous impairments across our state, and most of these impairments can be attributed to one industry. E. coli, MRSA, and toxic levels of nitrates are as much a part of our water in Iowa as hydrogen and oxygen. Where are they coming from? These harmful pathogens and pollutants originate in factory farms. Each year, over 10,000 factory farms across the state produce more than 72 billion pounds of manure. That waste is then spread on acre after acre of cropland, oftentimes in amounts far greater than the soil’s ability to absorb it. From there, the excess runs off into our waters, polluting our drinking water, limiting our ability to recreate on the water, and destroying critical plant and animal habitat.

Today, American Rivers named Iowa’s Raccoon River one of the Most Endangered Rivers in the U.S. The Raccoon River supplies drinking water to over half a million Iowans. Des Moines Water Works, Iowa’s largest water utility, depends on the Raccoon River in order to provide residents of central Iowa with safe drinking water. But industrial agriculture practices are rampant in the watershed. Over 750 factory farms are located in the basin and have put our access to clean water at risk. In order to provide safe drinking water to residents in Iowa’s capital city of Des Moines, the Des Moines Water Works was forced to invest in one of the world’s most expensive nitrate removal systems — a cost borne by ratepayers, not the corporate agribusiness entities responsible for the pollution.

I’ve lived in the Raccoon River Watershed for my entire life. As a child, I fished on the river. As a teenager, I swam in the river. But as an adult, I mourn the river. The memories I hold dear from my own childhood are not experiences I can now share with my child. She can’t catch a fish from a river loaded with harmful pathogens and bacteria. She can’t swim in a river that reeks with the odor of hog manure or that harbors potentially deadly algal outbreaks. The state of Iowa has traded our quality of life, our traditions, and our drinking water for Big Ag’s profit margin. While massive corporations like Tyson rake in billions of dollars by extracting our resources, hollowing out our communities, and influencing our elected officials, the residents of Iowa are left trying to hold the ramshackle pieces of our state together.

This is not what Iowa is meant to be. Our state motto proclaims, “Our liberties we prize and our rights we will maintain.” Where are our liberties when we can’t even step outside without being assaulted by the noxious odor of hog manure? Where are our rights when we glorify the destruction of our water, communities, and climate for the sake of corporate profit? The state of Iowa has failed us.

But the people of Iowa haven’t. We might not have bank accounts the size of Big Ag’s. We aren’t able to buy goodwill with community pork loin giveaways. We probably can’t auction off time with the governor. But the power of the people is with us, and we will keep fighting until we win.